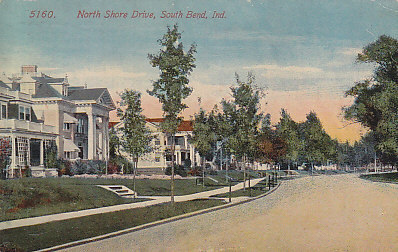 West North Shore Local Historic District was designated by ordinance in 1978. Although this collection of residences is primarily a product of the early 20th Century, the land on which the district stands is thought to have been first used by Native Americans as a place to fish and camp and then in 1820 by Pierre Navarre, the area’s first non-native resident, for the location of his trading post (the cabin now in Leeper Park).

Navarre’s son, Peter, sold the property in 1863 to Alexis Coquillard, son of the fur trader and cofounder of South Bend of the same name; in 1866 the land was purchased by Samuel Leeper, who farmed the land.

The oldest structure in the district, a vernacular farmhouse at 113 West North Shore, was built for Samuel Leeper, Jr. by his father as a wedding gift in 1888. The younger Leeper discovered clay deposits here around the same year and built a brickyard. The bricks, yellow in color, were used for buildings at The University of Notre Dame and were the first to be used in street paving in South Bend on West Jefferson Street.

In 1893, Leeper rented the brickyard and clay pits to others and became associated with the Home Improvement Company, selling the company his tract of land by the river for $75,000.00. In December, 1903 the Home Improvement Company filed a plat and named it the Navarre Place Addition; the old Leeper house was soon part of a subdivision stretching from the river, four blocks to the north, and running from Michigan west to Lafayette Boulevard.

The subdivision became a stylish place for middle-class homes; it was within distance of downtown via the streetcar line on Michigan but was removed from older, crowded sections of the City. Among the first residents here were: Judge Thomas Slick (1906), a local prosecuting attorney involved with several notorious cases involving the Ku Klux Klan and “gangs”; Solon Rider (1906), proprietor of a “five and dime” store on Michigan Street and vice president of the Home Improvement Company; and Dr. Edwin Lent (1905), a Canadian immigrant who helped organize the South Bend Clinic.

Today’s district consists of the nineteenth-century Leeper farmhouse, seventeen early twentieth-century structures in a variety of popular styles of their time and two 20th Century Ranch-style houses. Among the many interesting residences here is a Sears and Roebuck mail-order house. This Neoclassical structure, a “Magnolia” as it was named by the manufacturer, was constructed in 1927 for Daisy and Max Stryker at 325 W. North Shore. In 1925, an Italian Renaissance structure was built at 219 W. North Shore. This was one of few designs in this mode by local architect Ernest Young. Its neighbor to the north, 221 W. North Shore, is an example of the Mission Revival style popular in the 1920s when it was constructed.