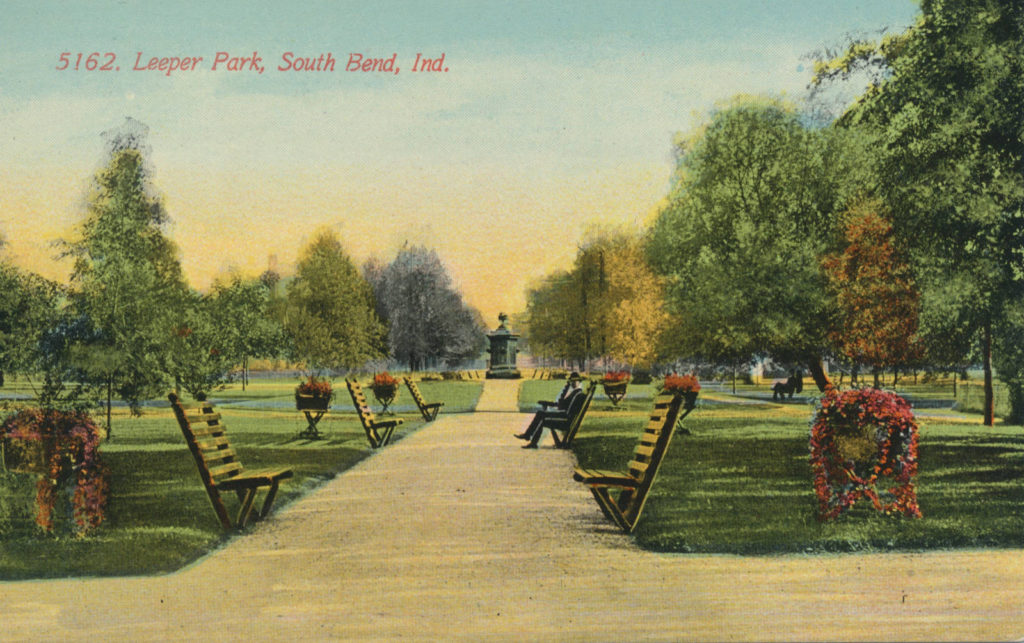 Land Acquisition
Land around the pumping station was used for park purposes as early as 1897; the grounds were named Leeper Park in 1900. Original land purchases were expanded in 1901 extending the park boundaries to the St. Joseph River, including a small island north of the riverbank. In 1901 a public right of way was acquired, allowing the extension of water lines west of Michigan St. to Lafayette Blvd. This right of way, named Foote Street, is now Park Lane. In 1902 the land north of Foote Street, extending to the St. Joseph River, between Michigan and Lafayette Blvd. was donated to the City. A final tract of land west of Lafayette Blvd. extending to the eastern boundary of the Chapin Park subdivision was acquired in 1906. A Landfill in 1922 created by filling a slough between the mainland and a small island in the St. Joseph River brought the park acreage to the current 25 acres.

Improvements
In 1901 the grounds of the Pumping Station were seeded, and flowers planted. In 1902 a lily pond was constructed in the Central Section of the Park; this original pond was replaced by the digging of 2 lagoons in 1907. The western lagoon was known as the duck pond; the eastern one, a lily pond. A rustic carriage bridge was also constructed, crossing the lily pond. A bridge to the Island had been constructed in a rustic style in 1902, opening up the island for use as a picnic ground. A small zoo was also established in 1902 in the Eastern section. In 1904 a log cabin was relocated to this area of the park; it became known as the Navane cabin, associated with the founder of South Bend, Pierre Navane. 1904 also brought the construction of a park drive along the riverfront extending along the eastern section and under the old Leeper (Michigan St.)Bridge. The drive was extended through the center section of the park from 1904-1907. These drives were renamed Riverside Drive in 1909. Other improvements to the park from 1905-1910 included development of a garden and fountain in the central section, the fencing of the duckpond, the construction of walks and macadamed drives, and the addition of playground equipment. These early improvements were guided by plans for the park prepared by superintendent Herman Beyer in 1905.

In 1911 the Board of Park Commissioners hired George Kessler to prepare a master plan for the development of a park and boulevard system for the City. That plan, published in 1912, called for the expansion of Leeper Park, which was to become the centerpiece of the South Bend Park system. The Kessler Plan called for Riverside Drive to be extended along the St. Joseph River, connecting up and down -river parks, and to the urban boulevards extending to the outer and neighborhood parks of the City. The Kessler master plan was supplemented by detailed plans for individual parks, including one for Leeper Park (1915). This detailed plan, overlaid with earlier developments created during the Beyer years, would guide Leeper Park development for an additional decade.

The Leeper Park zoo was removed from the Park in 1914. The banks of the St. Joseph were also improved that year with limestone blocks and rip -rap in conjunction with the construction of a new bridge. The Michigan Street bridge replaced the iron Leeper Bridge in 1915. In 1915 the Park drives were remodelled in the center section, to conform to the Kessler Plan for the Park.Additional plans by George Kessler refined drive relocations in the center section. In 1918 a stone wall along the eastern section riverbank was constructed, using cut stone from the Michigan Central Railroad right-of-way. The Kessler Plan also guided the development of active recreation facilities for Leeper Park. In 1915 tennis courts, baseball and football fields and a playground were developed in the western section of the Park. A 1500′ toboggan run was also a feature of this portion of the park.

In 1916 a circular, sunken garden was constructed in the eastern section, partially surrounded by a curving pergola (1918). The garden was planted in daylilies centered around a sundial. An additional formal garden area was developed in 1919, extending the axis of Main St. into the Park. The Kessler era improvements were completed in 1922 with the creation of 2 additional acres of parkland by filling a shallow slough which separated a small island in the St. Joseph from the mainland of the Park. A 100’x 200′ Rose Garden was created east of the Pumping Station in 1922, as well.

George Kessler passed away in 1923; improvements to Leeper Park continued in the 1920’s and 1930’s. In 1924 the sunken garden was redesigned in the landfill area of the eastern section; 700 roses were planted. Works Projects Administration (WPA) funded labor for several projects in Leeper Park. In 1936, a retaining wall faced with scrap salvage concrete was constructed around the island and the channel of the slough was dredged. In 1938 a shelter house near the tennis courts was also built with WPA labor. The three well -house structures which now serve as eastern section restrooms, the Zeigler performing center, and a folly in the center section, were constructed c. 1930-40. The Zeigler center was dedicated in 1940. A Fragrance Garden was added to this area of the park in 1955.