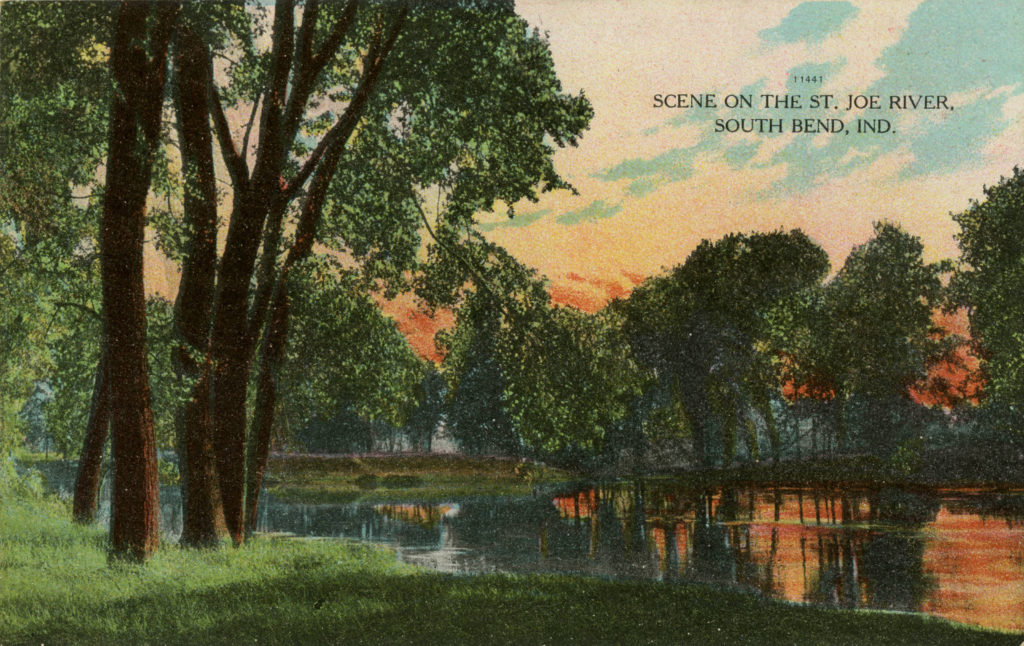 Edgewater Place Local Historic District was designated by ordinance in 1980. This land was outside the southeastern boundaries of South Bend when the city was laid out in the 1830s. Located along the St. Joseph River, the land was marshy with a narrow peninsula extending into the river to the north.

Alexis Coquillard purchased the land from Francis Comparet in 1835, losing it when he went bankrupt in 1841. The land was purchased by Christopher W. Emerick in 1845. Emerick was an early local pioneer(1832) who was the proprietor of a bakery and beer house and was involved in real estate. Emerick owned the land into the 1860s.

Development of the neighborhood began in 1871 when George A. Frantz platted the southeast section along the road leading to Mishawaka, the Vistula Road (now Lincolnway East).
The 1875 Historical Atlas depicts five houses on Frantz’ plat; two others are shown immediately to the north. There were also two structures to the northwest along the river. In the 1870s the area to the west was also undergoing development; a mixture of manufacturing plants and residences were being constructed. The early homes built here were likely for workers in those plants.

The Birdsell Manufacturing Company built a large factory straddling Columbia and Division (now Western Ave.) Streets just south of the Grand Trunk Railroad line in 1872. By the 1880s there were several lumber yards west of Vistula road; in 1891 several boathouses and the Asire and Kuntz Machine Shop were located on the east side of Vistula Road just north of Monroe. The slowly developing neighborhood was a buffer Leslie C. Whitcomb Frederick W. Keller between those areas and the river.

Further development took place with the platting of the Harper Court Addition by Abigail and William Harper in 1889. This small addition was located east of Frantz’ development and contained two new streets, Harper Court ( now Bronson Court) and River Avenue. The area along Vistula Road, from Monroe Street to Arch Avenue extending one half block to the east, was platted in 1897 by Andrew Fuerbringer.

The remaining portion of the district was left undeveloped until the platting of the Edgewater Place Addition in 1919. This subdivision included all the property up to the river as well as the southern portion of Fuerbringer’s Addition. The marsh and water between the peninsula were filled in. Arch Avenue was named after Alex L. Arch, a World War I veteran from South Bend honored for having fired the first shot for the United States in the war.

Edgewater Place Addition was developed by Leslie C. Whitcomb (1860-1939) and Frederick W. Keller (1872-1959), two of South Bend’s important early developers and realtors. The subdivision was one of the first platted by the two. Whitcomb and Keller were responsible for the construction of approximately thirty-two hundred new houses in South Bend during the first half of the twentieth century. Their company platted and developed twenty-three other subdivisions including Ridgedale (1925) and Sunnymede (1923). The firm was also responsible for the construction of office buildings, hotels and other structures.

Both men had houses constructed in the development: Whitcomb a Prairie-influenced residence at 557 Edgewater in 1920 and Keller a Tudor Revival residence, designed by Ernest Young, at 815 Arch in 1923. many employees of their firm also had homes built here. They were joined by other South Bend merchants and professionals.

The majority of district houses were built in the 1920s by the Whitcomb and Keller firm in the popular styles of the time including Colonial and other revival styles:Prairie, Bungalows and vernacular variants such as the American Foursquares. Among these is the house at 644 East Monroe Street, an Ernest Young design, built in the English Cottage style in 1926. A fine example of the Bungalow style can be seen at 549 Edgewater, the Julian House (1922). There are also several apartment structures located on LincolnWay East; the brick building at 709 Lincoln Way, a Freyermuth and Maurer design (1922), and an adjacent building at 705 Lincolnway, built in 1920.