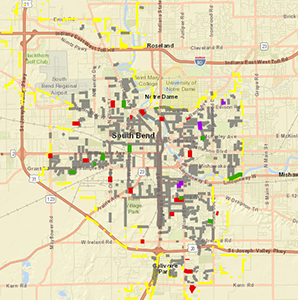 The City of South Bend’s Department of Public Works released the 2018 paving list for the season at a press conference earlier today. With local asphalt plants opening last week, paving season will now be in full swing throughout the City with 26 lane miles of repaving planned for 2018. The City is able to pave an additional eight (8) lane miles, or a 40% increase, in paving due to funds available from the state gas tax increase passed in the 2017 General Assembly. Work will be completed by both City and contractor crews.

To determine the paving list, the Division of Streets worked in conjunction with the Division of Engineering to perform its annual assessment of the street surface conditions throughout the city using the industry accepted PASER rating system. In this system a rating of 1 indicates a failed road and 10 indicates excellent condition. Based on this rating, Division of Streets staff identified the lane miles of streets that are in the worst condition in the city and will be part of the 2018 paving program.

Updates on other streets of interests: Work on Ironwood Drive is currently underway as part of the Ironwood Drive Pavement Rehabilitation and Intersection Project, which is funded through the State of Indiana’s Community Crossings Matching Grant. Paving work for Bendix Drive and Olive Street are in the procurement process for federal funds with hopes that these projects will be under construction in 2019. In the interim, the City will be doing temporary patches on Bendix Drive and Olive Street until federal funding is available. INDOT will be resurfacing S.R. 23 between Michigan St., near the South Bend Police Department, and Olive Street near the casino.

The 26 lanes miles of repaving work being done by City and contractor crews is listed below:

– N Lee Court from Fairfax Drive to end of drive

– Tasher Street from Fellows Street to end of drive