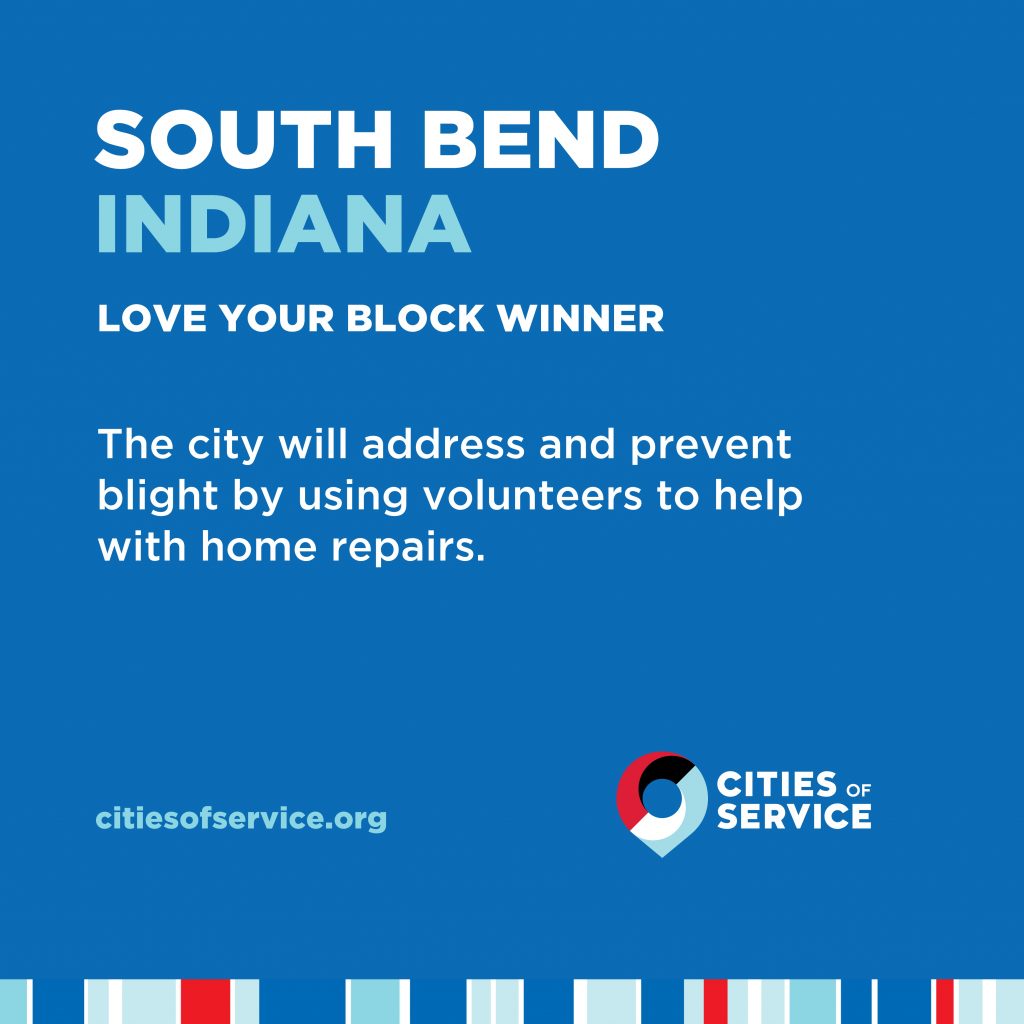 Cities of Service today announced South Bend as a winner of its Cities of Service City Hall AmeriCorps VISTA Love Your Block competition. Love Your Block enables local governments to engage communities in neighborhood revitalization efforts benefiting low-income communities. South Bend will receive $25,000 to be used for mini-grants and resources to support the efforts of citizen groups and local nonprofits to prevent or eliminate property blight through home repairs, lot transformations, and community clean-ups. In addition, two AmeriCorps VISTA members will serve in city hall to build capacity and raise awareness.

This year’s Love Your Block competition was targeted specifically to legacy cities—older, industrial cities that have faced substantial population loss. The winning cities were selected based on potential for impact and clarity of vision for their proposed projects.

South Bend faces challenges with aging housing stock that risks falling into disrepair. The city will implement a Love Your Block program that will prevent and reduce blight by engaging volunteers to address home repairs.

“A recent study from Urban Institute has shown us that the impact of Love Your Block goes beyond cleaning up neighborhoods and creating more park space,” said Cities of Service Executive Director Myung J. Lee. “It is also bringing neighbors together and strengthening communities. We are excited to help South Bend revitalize neighborhoods and build trust between city hall and residents as part of these efforts.”

The Urban Institute study found that the connection that Love Your Block forges between city leaders and citizens at the neighborhood level can be an essential catalyst for collective action by neighborhood residents. This connection between city officials and citizens boosts the social capital exercised by citizens who plan and implement Love Your Block projects and strengthens social cohesion. Love Your Block volunteers believe their efforts also positively influence public safety and community ownership of public spaces.

“The Love Your Block program will build on the existing work of local neighborhood associations by connecting residents and empowering them to repair their homes and community spaces,” said Mayor Pete Buttigieg. “Increasing inclusive economic growth is a part of the City’s mission statement: ‘We deliver services that empower everyone to thrive.’ I am confident that the City’s Love Your Block program will advance this mission and benefit all South Bend residents.”

“I’m thrilled at the opportunity Love Your Block presents for the City to learn from the lived experience and collective action of residents,” said Director of Engagement & Economic Empowerment Alkeyna Aldridge.  “This is another step in a shifting paradigm that pushes the City to learn from the lived experienced of marginalized communities. We need to understand at a grassroots level what folks are already doing to impact change in their neighborhoods and do everything we can to support it.”

Since 2009, Cities of Service has helped dozens of cities implement Love Your Block. More than 10,000 volunteers have been engaged to remove over 480,000 pounds of trash, clean up nearly 600 lots, and create more than 180 art displays, in addition to numerous other community projects.

About Cities of Service

Cities of Service is an independent nonprofit organization that helps mayors and city leaders tap the knowledge, creativity, and service of citizens to solve public problems and create vibrant cities. Cities of Service works with cities to build city-led, citizen-powered initiatives that target specific needs, achieve long-term and measurable outcomes, improve the quality of life for residents, and build stronger cities. Founded in 2009 by New York City Mayor Michael R. Bloomberg, Cities of Service supports a coalition of more than 250 cities, representing more than 73 million people across the Americas and Europe. Visit the website at citiesofservice.org or follow them on Twitter @citiesofservice.