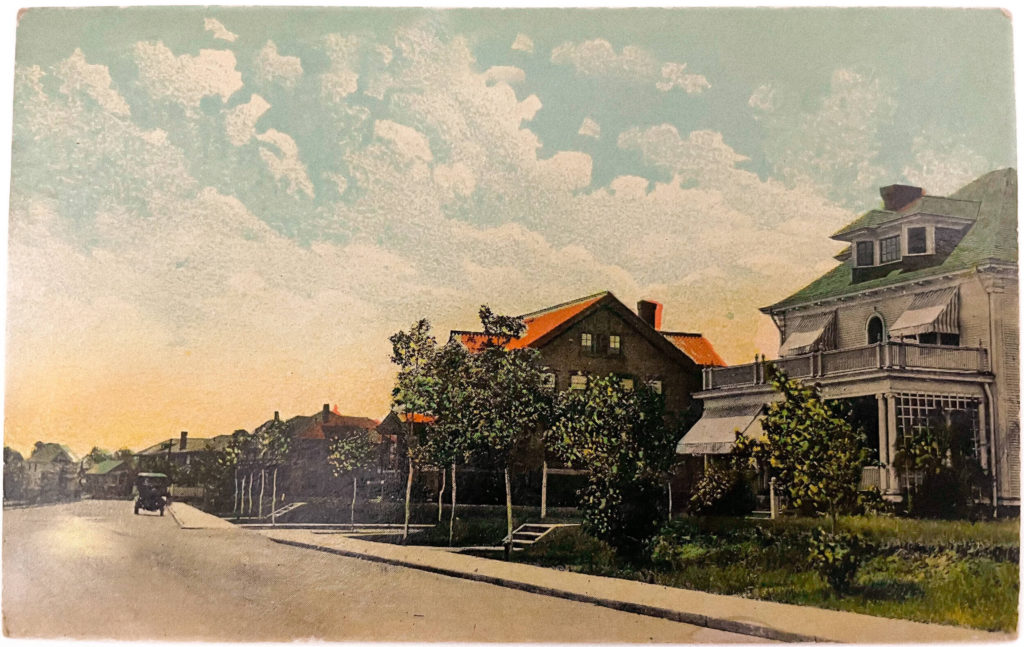 This area was located northwest of the original town of South Bend and remained undeveloped into the latter half of the 19th Century. Development began when Horatio Chapin’s successors platted the Chapin Place Addition in 1890 on land that had been the family estate. The Eastern one third of the district lies within the Chapin land which was further subdivided in 1902 and 1910.

In 1890 and 1891 three Shetterley Place Additions were platted directly to the west. The middle one third of the district – between Golden and Leland – lies within the Shetterley Place Third Addition platted by Christina Shetterley, George and Mary Rockstroh, and Annie P. Miller in 1891. The western one third of the district – beyond Golden – lies within the Portage Park Addition subdivided by the Portage Land Company and its president H. G. Miller in 1902.

What had been separate streets under various names as the neighborhood grew, was officially named Riverside Drive around 1910. The neighborhood grew most rapidly from 1902 to 1918 when eighty-one percent of the residences were constructed. The two oldest buildings (circa 1898) constructed in the district are located at the north end of Chapin Place where Park Avenue meets Riverside. The Queen Anne structure at 1007 Riverside was built in 1890 and moved to Horatio Chapin its present location in 1912.

The rapid growth of the area can be attributed to its location near the streetcar line on Portage Avenue, providing access to the rest of the city after the 1880s and its suburban location away from industry and the bustling city. The street’s location overlooking the scenic St. Joseph River also attracted homebuyers to the area, as did the city’s 1985 development of Leeper Park in the lowland immediately east of Chapin Place.