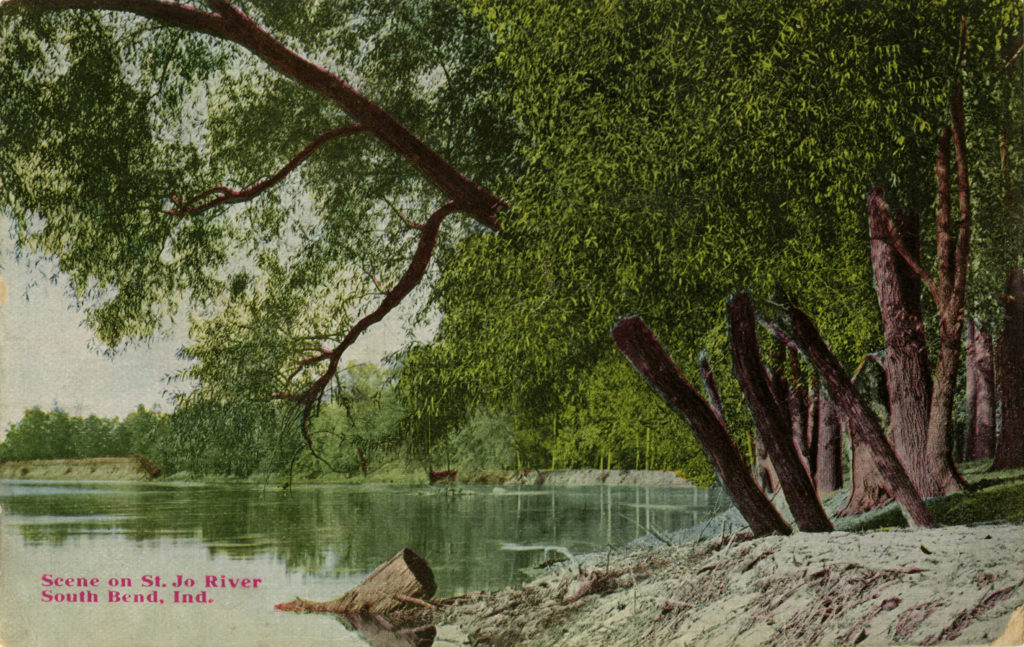 River Bend Local Historic District was designated by ordinance in 1992. It is a collection of buildings reflective of a specific era of South Bend’s architectural development – the commencement of the 20th century until just after World War I. The majority of the houses were built between 1903 and 1920.

This land was immediately outside the original town of South Bend. The area was platted in 1903 by real estate developers Leslie Whitcomb and Seth Hammond as Hammond & Whitcomb’s Addition containing all of the area between Bartlett, Riverside Drive, Marion, and North St. Joseph Street. In the 19th century the land had been the site where the Kankakee Mill Race (“Coquillard’s Folly”) ended, connecting the St. Joseph River with the Kankakee River five miles south of the city, and traversing the north/south continental divide. A four-story grist mill stood here from 1837 until the millrace failed in the 1850s. After 1885 the land was the site of Soen’s Brick and Drying Yards.

In the 1890s a few houses and businesses were located on Michigan Street just west of the neighborhood; this area however remained undeveloped. By the turn of the century houses were beginning to be built on Marion and Navarre Streets just outside of the district; St. Joseph Street ended at the brickyard. City Directories for 1904 reveal that houses were built on Navarre, the east side of St. Joseph, and Hammond Court after the subdivision was platted. Among the earliest buildings in the district are 225 Hammond Place, an intact turn-of-the-century cross-gabled house, and the Gabled Ell at 230 Hammond, both built in 1904. By 1912 thirty-nine houses had been built; in 1921 the neighborhood as it stands today was essentially in place.

Seth Hammond (1860- 1939) and Leslie Whitcomb (1836-1927) were two of South Bend’s most important real estate developers in the early 20th century. Hammond was the son of area pioneers who made his living from farming as well as real estate speculation and development. Whitcomb was the developer of hundreds of homes in the area and platted numerous subdivisions on his own and with others, including (Mayor) Fred Keller. He also was involved in financing home sales as Secretary of the Workingman’s Building & Loan Association, an organization responsible for advancing millions of dollars in mortgage monies to local citizens.

The development was predominantly homes for South Bend’s middle class. By the teens almost 80% of the residents were businessmen, professionals, or held white collar positions of some kind. The neighborhood was located within easy walking distance to the streetcar line on Michigan Street, providing transportation to work and the shopping opportunities of downtown before automobiles came into common usage. The area continued as a middle-class enclave up until the Second World War.

One of South Bend’s mayors, attorney Eli F. Seibert, lived here for many years. Seibert was mayor during the “Roaring Twenties,” from 1922 to 1926. He was regarded as one of the city’s most business-like mayors, and his administration , recognizing the need to control developers, founded the City Planning Commission. Among other notable business and professional people who lived here were: Walter M. Hildebrand, real estate developer, owner of Staple-Hildebrand Company, and President of the Chamber of Commerce and City Plan Commission; and J. A. M. LaPierre, local pioneer, Civil War veteran and businessman.

The structures along Riverside Drive are similar in size and shape – the entire group is an almost unbroken line of American Foursquares and/or late Queen Anne-inspired residences. Two Prairie Style houses are also located on Riverside. The most “high-style” residence here is at the corner of Riverside and Bartlett, showing a mixture of elements taken from the various revival movements of the era. An excellent example of a Bungalow executed in the Craftsman Style is located at 221 Navarre Street.