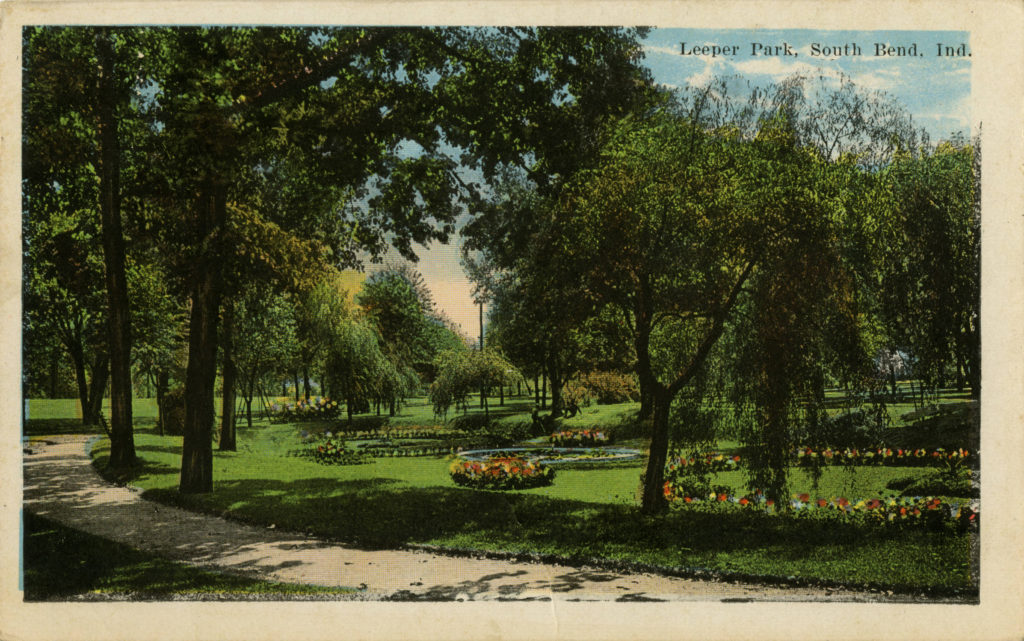 The North St. Joseph Street area was immediately outside of the plat of the original town of South Bend. Throughout the Nineteenth Century it remained as undeveloped land marked by a steep hillside overlooking the bottomland where the failed Kankakee Mill Race emptied into the the St. Joseph River Into the 1870s this vicinity was occupied by only a few agricultural buildings. During this and the following decade, houses, businesses and the Turners Hall were constructed along Michigan Street at this distance from the city. After 1885, Christian Soens operated a brick mill and drying yards located in the lowland which began at what was to become St. Joseph Street.

As late as 1898 no streets extended more than a half block east of Michigan Street in the area. In 1903, Bartlett Street was extended to establish the south boundary of Leeper Park, and houses in this district began to be built in 1904.

St. Joseph Street was first platted in this part of the city as the east boundary of the Rockstroh Brothers’ Second Addition in 1899. The east side of the street was then established as building lots in Hammond & Whitcomb’s Addition platted in 1903. Seth Hammond (1860-1939) and Leslie Whitcomb (1836-1927) were two of South Bend’s most important real estate developers in the early Twentieth Century. Hammond was the son of area pioneers who made his living from farming as well as real estate speculation and development. Whitcomb was the developer of hundreds of homes in the area and platted numerous subdivisions on his own and with others including (Mayor) Fred Keller. he also was involved in financing home sales as Secretary of the Workingman’s Building & Loan Association, an organization responsible for advancing millions of dollars in mortgage monies to local citizens.

City directories for 1904 reveal that houses sprang up quickly on Navarre Street and the east side of St. Joseph Street soon after platting. It is clear form the bird’s-eye views from the Late Nineteenth Century that considerable landfill was required to raise the level of the bottomland sufficiently to allow construction and habitation. By 1912 the neighborhood between St. Joseph Street and Marion Boulevard (now Riverside Drive) was nearly half built-out, with 39 houses having been constructed. In 1917 the length of St. Joseph Street platted by Hammond & Whitcomb was essentially complete. As it stands today, Hammond & Whitcomb constructed many of the houses themselves.

From the beginning, the neighborhood was predominantly middle-class. By the teens almost 80% of the residents were professionals, business owners, or held white collar positions of various kinds. The neighborhood was located within easy walking distance to the streetcar line on Michigan Street, providing transportation to work and shopping opportunities of downtown before automobiles came into common usage. The area continued as a middle-class enclave up until the Second World War.

An unusual number of the residents of North St. Joseph Street were construction professionals. Most notable among these was Christian Soens who had owned and operated the brickyard which occupied the area before its residential development. Soens was also a contractor for construction of the City’s sewer system. George Hoffman, who lived at 516 North St. Joseph Street was a notable General Contractor. Trained as a carpenter, he later had interest in the Standard Cement Brick Company of South Bend. Around the time that he built his house he had a standing crew of 65 workers engaged in construction at the Studebaker plant. The house at 609 N. St. Joseph was presumably constructed by its first owner and occupant, Andrew Jorgensen. Mr. Jorgensen was a mason by trade.

Other residents of these blocks included a dentist, a dairy superintendent, a lieutenant fireman, a clothing merchant, and a music teacher on the faculty of the University of Notre Dame. The house at 610 St. Joseph Street was originally used as a parsonage for the United Brethren Church. A grocer maintained a small store which is now gone adjacent to his residence at 202 East Hammond Court.

The neighborhood was not exclusively middle-class however. Working class residents during the neighborhoods first generation included a dyer for M.W. Manufacturing Company, a janitor, and a single woman who worked for the South Bend Watch Company. Four of the houses appear to have been employed as rental properties from their time of construction (including the parsonage which was in fact owned by Seth Hammond himself).