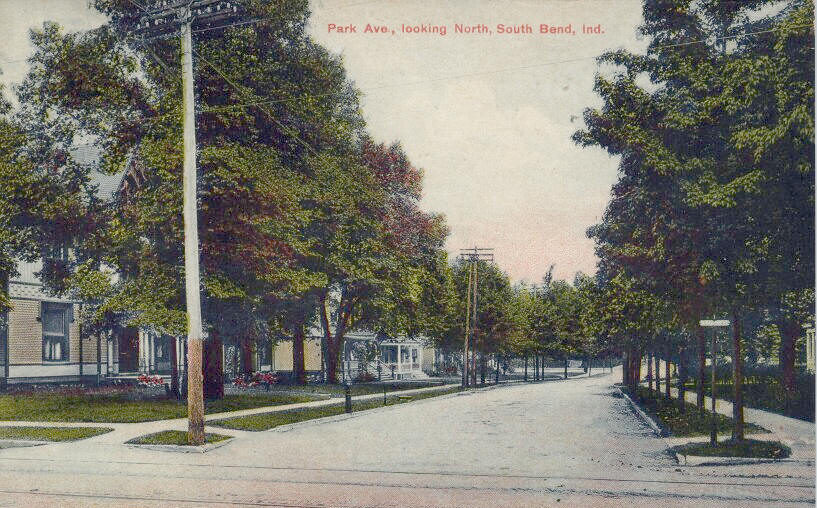 The Chapin Park Local Historic District (the District) is an architecturally unique, mainly residential area located close to downtown South Bend, Leeper Park, Memorial Hospital and the Saint Joseph River. Although many individuals were involved in the development of Chapin Park, the District is named for the Chapin family, who had early ties to South Bend and held interests in the District for one hundred years.

THE CHAPIN FAMILY
Martha Emiline (d.1846) and Horatio Chapin (1803-1871) settled in South Bend in 1831. The youthful town had just been platted by Alexis Coquillard and Lathrop Taylor and contained only a few log buildings. Horatio soon became active in religious and business affairs. He applied for and received a license to sell foreign goods – items from across state lines – and opened a dry goods store. By 1834, he had co-founded the ecumenical Union Sabbath School, was named its Superintendent and assisted the founding of the First Presbyterian Church. When the State Bank of Indiana opened its South Bend branch in 1838, Chapin became its cashier and worked for the bank until 1862. This position would provide him the fortuitous opportunity to purchase forty wooded acres north of South
Bend. From 1862 until 1865, he managed the private banking firm of Chapin, Wheeler & Co. in Chicago, and then retired to his picturesque estate, once called Chapin’s Place,
Chapin’s Park and even Chapin’s Grove.

Mary Chapin married attorney Andrew Anderson in 1857, and they raised two daughters: Emma Anderson DuShane and Jennie Anderson Putman. In 1876, Edward married Marie Lamont Cushing, the widow of his business partner, Quincy Cushing, and had two children, Wilber Storey Chapin, who died at the age of two, and Marie Pearl Chapin (1879-1914). Edward’s second wife, Lenora Lamont Chapin, lived at 856 Forest from 1916 until her death in 1941, and Mary’s granddaughter, Mary DuShane, resided in the family home, 710 Park, until she passed away in 1962.

THE KANKAKEE CANAL, WHAT DID NOT COME TO BE: 1835 -1855
Chapin Park may not have become a residential area had not Alexis Coquillard’s attempt to operate a canal and power race between the Kankakee and the St. Joseph rivers failed. In 1835, Coquillard and his partner, Francis Comparet, purchased 230 acres north of South Bend and borrowed $46,000 – about one million in today’s dollars – for its construction. However, the engineering never produced the needed water flow: it was erratic and traveled in the wrong direction. By 1845, Coquillard defaulted on the loan and the State Bank of Indiana acquired the property as outlots. The vestiges of Coquillard’s Kankakee canal can still be found in the southern part of the District between Marion and Navarre streets where a diagonal line divides the lots.

By 1857, Horatio Chapin’s Gothic revival residence had been completed. Over the next decade and a half, Chapin created a picturesque country estate worthy of Andrew Jackson Downing’s praise. As depicted in the late nineteenth-century aerial views of the city, Chapin planted gardens and an orchard and laid curving paths through the wooded property. (He was known in South Bend for his horticultural knowledge.)

Mary and Andrew Anderson and Edward Chapin moved to the estate in 1871, the same year their father passed away from a heart disorder. Oddly enough for a banker, Horatio died intestate. His children spent the next four years settling the estate and may have lived in their father’s house. In 1875, the estate was settled and Mary and Edward decided to divide the property along the carriage drive (now Park Avenue). Mary received the property to the east of the drive and Edward received his father’s house and the property to the west. After the division of the estate, Mary and Andrew Anderson were free to build their own residence overlooking the brook that once flowed across the property. They likely built 710 Park Avenue between 1875 and 1877.

In 1875, Mary and Edward’s aunt and uncle, Emma G. and Marshall P. Chapin, joined the younger Chapins on the estate. Marshall purchased a parcel from Mary Anderson the same day she and Edward agreed to divide the property – June 3, 1875. He then probably built 720 Park Avenue. He worked for the State Bank from 1855 until 1862 and owned the Knoblock grocery store with J. Kuhns after the Civil War. The Marshall Chapins moved to 60 Lafayette by 1878, but their house in the park did not remain empty for long as Mary Anderson’s recently married daughter and son-in-law, Emma and James DuShane, became the second residents. They lived in the house until 1905 when they moved to 710 Park.

After living on Madison Street from 1875 until 1877, Edward moved back to the estate with his first wife, Marie Lamont Cushing Chapin. The Edward Chapins would live on the property until 1883, but by 1891, Edward and Marie returned and built a house just north of Forest Avenue overlooking the river. This house, called the Oaks, would be moved circa 1912 to 1007 Riverside Drive. (Edward and Marie Chapin lived at 115 N Lafayette from 1884 until 1890.)

A NEW NEIGHBORHOOD: 1880-1925
The estate remained a Chapin family enclave until 1880. During this year, Mary Anderson sold a portion of her property flanking Navarre Street to banker Myron Campbell and an area south of the brook, now Lower Lamont Terrace, to Albert and Eva Sibley. Edward followed suite by selling his father’s house and the portion of his property south of Lamont Terrace to Mrs. Nellie Taylor in 1883. By 1884, Edward had also sold lots to eight households: the Lyon, Giddings, Ware, Davis, Elliott, and the George, Charles and Alvin Hodson families. These families built houses along Navarre Street, Park Avenue and Lamont Terrace between 1883 and 1889.

The development of the neighborhood continued in the 1890s. Edward Chapin had sold many of his 73 lots by July 1890, and by 1895 many houses had been built along Forest Avenue and Manitou Place. Mary Anderson continued to sell lots on Park, and John Shetterley’s holdings had been platted with lots along Leland, Ashland (formerly known as Dore) and Rex. In 1897, Park Avenue was paved with brick. Construction continued from 1900 to 1920 with the platting of the Anderson, DuShane and Putman Addition along Lower Lamont and the Keller, Fassnacht and Smith subdivisions along Portage Avenue, and the creation of Sibley Court (1906-1916). By 1925, houses were built on the last available lots in the District. The result is a rich complexity of building forms and architectural styles cozily placed next to one another. The major periods of construction span 65 years: from South Bend’s early development before the Civil War to its post-bellum era of manufacturing and industrial growth and civic and residential expansion.

RECENT HISTORY
After many homes were divided into multi-flat units in the 1930s and 1940s, residents recognized the uniqueness of this neighborhood and began to rejuvenate it in the 1960s. In 1972, residents organized PANA, the Park Avenue Neighborhood Association, which sought to retain the neighborhood’s viability. The organization is now known as the Chapin Park Neighborhood Association. The area sought listing in the National Register of Historic Places in 1980 with designation granted in 1982. The northern portion of the Chapin estate has been included in the Riverside Drive Local Historic District since 1985. The Chapin Park Local Historic District was established in March 2005.